Today Carolyne Steele is a guest on my blog. I promised her to go easy, so I’ll not grill her but just slow roast for a change. 🙂

Hi Carolyn, thank you for stopping by my blog today. I’d like to get started by asking you a few personal questions so that we can get a feel of the person behind the author. If that’s okay with you?

Hey, I’m a memoirist, we love talking about ourselves it’s cheaper than therapy.

Given the choice where would you rather live, the UK or Canada? Flat land or mountains?

Definitely Canada, I fell in love with the place very fast and hankered after being a Canadian for years before it happened. I mean no disrespect to England by this, I think some of us just have to leave our roots to feel truly alive, just as others of us have to return to them. As for plains or mountains, I don’t mind, just so long as there’s a vastness about either.

Another choice question. An action packed, or a quiet life?

Oh, difficult, I love both. I’m as happy dealing with drama and crisis as I am sitting about with some sewing and a cozy play on the radio. My perfect life alternates between both, which is pretty much the way I have it organised these days.

Would you say you are a socially engaged person, or do you generally shy away from society?

I’m getting more antisocial as I age, but that might just be lack of stamina. After 5 years running a B&B and having people in my face 24/7 (and not always nice people) I went very introverted for a while. That’s actually one of the reasons I went off to drive for a living, but that wore off after a few years and I can bear company again.

Well, that wasn’t too bad, or was it?

I’m glad to hear that. 🙂 But since you’ve come here to talk about your work, can you tell us the title of the book you would like to talk about?

Trucking in English, it’s part of a series about being a Brit abroad. 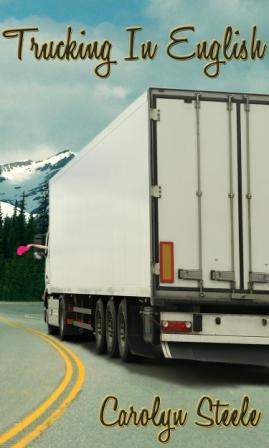 Did you have difficulty coming up with this title?

To start with yes, but then I was trying to find a title for a blog. I had a drunken chat with a pal via Facebook one night and we came up with Trucking in English as a holding title for what were going to be my online musings from the cab as I drove long haul. Once the name had stuck, it seemed an ideal title for the eventual book.

If you would have to change the genre in order to be able to publish it, what would it be then? i.e. would you conform to the market?

I’ve thought this over a great deal, ever since my first book came out. People tell me nobody reads memoir and I could sell more by pretending that what happens to me is fiction. They’re probably right and I did consider making the third book in my emigration trilogy into a Bridget Jones type novel but so much would be lost. The problem with real life is that it’s always more outrageous and weird than you can get away with in fiction. I learned that back when I was driving ambulances, we’d occasionally send a really wacky story to a TV series about paramedics and they’d invariably reply that it was too unbelievable to put in a script. So, I’m sticking to non-fiction for now. Even if nobody reads memoir, I want the stories out there in all their mad and messy glory because I love the bizarreness of real life. Everything in the tale of what happens when a middle-aged Englishwoman takes it into her head to drive 18-wheelers across America is true, as will be the next and oddly frightening story of trying to run a Canadian B&B. If I were to put the fires, floods, drugs, prostitutes and life sentences for 1st degree murder into a novel about a B&B, people would rightly call it far-fetched.

Can you tell me how you celebrate finally getting that tricky chapter (or para) right?

A Snoopy dance of glee and a gin and tonic. Spot of fiction there for once, that would be how it went if I ever realised at the time that it was right, generally I have to be yelled at by my fiercest critic. This is my son and since I instituted a ‘rule of three’ when he was growing up he has turned it round on me. I refused to say anything more than three times back when the conversations were about treats and homework; now he refuses to say, ‘Yes it’s fine now!’ more than three times.

What do you do marketing wise and what do you think generates the most attention to your books?

I have the typical British reserve when it comes to blowing one’s own trumpet and find marketing very difficult. I try to engage with readers and authors and be a person with things to say other than ‘buy my book’, hence I love to join in with blogs such as yours. I write for The Displaced Nation as well as Indies Unlimited and try to be useful and helpful as well as amusing, but as far as actual book marketing goes I struggle to find direct ways that work. Beyond leaving sneaky bookmarks here and there, and an annual Facebook ad at Christmas all about how Trucking in English would be an ideal gift for the driver in your life, I flounder a little. I do see a little spike in sales after I’ve contributed a guest post somewhere, so I try to do as many of those as possible. The subjects of my books aren’t necessarily of immediate appeal but it looks as though readers will risk a download if they enjoy my take on the world.

Is there any food or beverage that is a constant factor in either your books or life? 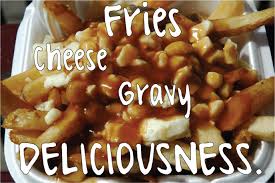 The joy of new food is probably most constant. Whether I like it or I don’t (and don’t get me started on Poutine) I am fascinated by the way food changes as you move around, not just the world but within one country. My travel writing began with strange things on menus and it’s remained a theme. I love the way you can drive, say, from the Canadian border to Florida and know how far south you are by what’s on offer to eat. I don’t want to eat biscuits and gravy, or grits, but I love the troubling images they conjure up in my British mind when I read about them.

What is your favourite dish and can you give me the recipe?

So many favourites, it’s hard to choose, but here’s a dish that has become one of my new Canadian Christmas traditions. My son and I made it for our first Christmas away from home, mainly because the job I had at that time (and the subject of my first book) was caring for a senior with Alzheimer’s. Living with this lady, stovetop cooking was kinda dangerous but we wanted to have a festive vegetable dish of some sort. We made this braised red cabbage in the oven and it came to represent the fun of starting over in a new life. Now I make it every year to go with the turkey. As a bonus, once the leftovers have been in the fridge overnight, it turns into a sort of chutney for cold meat sandwiches.

Layer shredded red cabbage and chopped red onion in an ovenproof dish, add chopped apples if you like. Sprinkle each layer with a little chopped garlic, some ground cinnamon, cloves and nutmeg, a spoonful of brown sugar and some salt and pepper. There can be quantities involved but it’s just as easy to stick in a bit more of what you like and a bit less of what you don’t. Finally, dollop over about 3 tablespoons of wine vinegar and dot the top with butter. Cover and bake in a slow oven for 2-3 hours, stirring once or twice. Additional bonus, you can make it the day before and then just reheat when you are up to your ears in relatives and trimmings.

Sounds delish, and I will prepare that one this crapmas.

Would you be able to come up with a credible excuse why you haven’t written a whole day? Remember, I have to believe it!

Ah, that’s an easy one for me, since I divide my life in half. I go off and have adventures for a while, during which time I make a few notes but don’t necessarily ‘write’. Then when I think I have a bookful, or when I collapse with exhaustion, whichever comes first, I stop and turn the mayhem into a book. So, if I didn’t write today, clearly I was having a tiring adventure instead.

Okay now that we have the mandatory questions out of the way, shoot your mouth off. Tell me whatever you want the blab about. But please no cat’s, dogs, or children. Make me laugh, or cry, or even envious. Tell me something none has ever heard before from you. hehehe, love those little dirty secrets, real or make believe. 🙂

I only became a writer because I once tried to be a stand-up comic and failed miserably. I could get whole roomfuls of people smiling inwardly and producing the occasional polite titter, which was obviously pretty mediocre as stand-up goes. Then one day I was reading a great book on the bus and smiling to myself. I tittered out loud and looked around embarrassed to see if anyone thought I was mad. When I heard myself recommended the book saying, ‘I even laughed out loud on the bus,’ it hit me that a reader’s titter is a triumph!

Therefore I should be writing my version of the world down, not trying to win over comedy clubs with it.

What else? I once got drunk with Terry Jones from the Monty Python team,

I’ve made a rabble-rousing speech in the UK House of Commons, I have a tattoo of a maple leaf on my bum, I jumped out of a plane at the age of 39 and met the love of my life at 54. One of those isn’t true. (Yip, the tattoo is really a bear.) And, finally, Trucking in English really is an ideal Christmas gift for the driver in your life.

Hahaha, those are a few great ‘dirty’ secrets. Thanks for sharing Carolyn. Now let me tell the readers to find you online at:
Author website, Blog, Facebook, and Twitter as @Trucking_lady