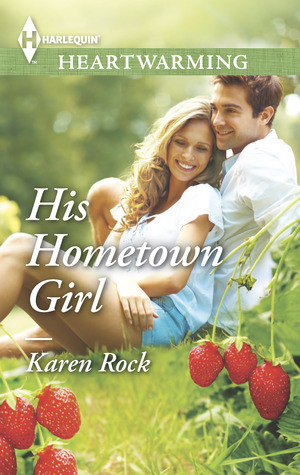 He’d always managed to best her.

Jodi Chapman will do whatever it takes to get top care for her autistic son. If that means going home and convincing local farmers to sell their land, so be it. Even if her biggest opponent, childhood rival Daniel Gleason, is equally determined to convince farmers to buy into his co-op plan. And he’s not playing fair.

Facing off against Daniel is the last thing Jodi wants. The attraction that’s always fueled their competitiveness is as strong as ever and just as distracting. But with both their futures on the line, and years of distrust between them, how can they ever be on the same side?

Karen was so kind as to interview Jodi for All That’s Written. I’d like to thank her for that and invite you to read it, find out more about the main character before you rush off to get the book.

So, Jodi, after reading His Hometown Girl, the reader understands more about you and how you became a junior executive at an industrial agribusiness. What can you tell the folks who haven’t read the book yet about your situation?I grew up on a dairy farm in Cedar Bay, Vermont and know a lot about farm life. I never minded the hard work as long as I was outside, in the country, working with animals. Farming communities are very close, and I loved picking berries at neighbors’ fields, going on hay rides, potluck suppers and holiday village get-togethers. But it wasn’t until I was in my senior year in high school that I learned that there was a darker, dangerous side to farming when my father lost his arm in an accident. Since I should have been helping him instead of spending time with a friend, I wasn’t there when his arm was pinned. He lost his arm because no one was there to call 911 for three hours after he was trapped, and I blame myself for it. Now, I work for a business that buys farms from families at a fair price so that they can pursue other dreams, safely, without being tied to their past. It gives them more opportunities and a different future than they’d grown up imagining. However, now that I’ve returned to Cedar Bay, my thinking has changed about that as you’ll see in the book.Your son Tyler is adorable! Yet he has his challenges too. What is it like raising a child with autism? What advice would you give mothers of children with special needs?

Thank you! I love Tyler and would do anything for him. Tyler’s father doesn’t agree that he has autism and, after our divorce, spends no time with Tyler. I feel extra protective of him, especially since Tyler stopped talking after his father walked out. I work with him on therapy activities every day which sometimes works well and, at other times, ends with both of us in tears. Sometimes I wonder- why Tyler? I spend way too much time on the internet looking up different ways to help him and trying this diet or that. Yet, no matter what, Tyler is always such a unique kid and his own person. He just melts my heart. He has an elephant named ‘Ollie’ that he dresses in wacky outfits every day and he has a deep belly laugh that’s cute coming from a four-year-old. It’s infectious. I just wish I could hear him speak again. It’s hard, sometimes, to feel like I’m doing a good job as a mother and I feel like if I could pay for the day care that would help him regain his speech, than I would have done what’s best for him. Yet my time at Cedar Bay challenges that notion.

As for advice, I think what I’ve learned is not to be so hard on myself as a parent and not hold my child to impossible expectations. Every child will make gains and learn at his or her own pace and all we can do is work with them, encourage them, love them, and most of all, accept and celebrate them for the joy they bring us. I spent too much time stressing that he wasn’t ‘normal’ when I should have realized that there is no definition of ‘normal’ and that Tyler is perfect just the way he is. Any gains he makes are worth celebrating, not stressing over.

You used to have such a strong connection with Cedar Bay and an old childhood rival and later secret boyfriend, Daniel Gleason. Do you think you could ever care for either of them again?

When I left Cedar Bay, I tried putting it, and Daniel, out of my mind forever. In their own way, both had crushed me. However, when my boss offered me a promotion if I returned there to purchase farm land, I had no choice but to accept. I needed that extra money to pay for the special needs day care that would help Tyler speak again. Yet my loyalties were divided when I arrived and remembered how much I used to love living in Cedar Bay. I felt torn that it would become a massive industrial farm if I succeeded in purchasing all of the land for my employer. Of course Daniel Gleason wasn’t going to make that easy. In fact, he planned to stop me every way he could, even using his old charm. Only, I wasn’t falling for that again. Or at least I tried not to…

Were you surprised about how much opposition Daniel gave you in trying to buy out his neighbor’s farms? He seems to love farming, but his actions seem even more personal than that.

I wasn’t surprised. In fact, as soon as my boss mentioned Cedar Bay, I knew Daniel would give me a fight. I remembered how, before we became a teenage couple, Daniel was always my biggest competitor. My earliest memories include him trying to beat me at spelling bees or growing the largest pumpkin for 4H club. We were always rivals until the summer of my father’s accident. Then everything changed, which is why it might be more personal than just a battle over Cedar Bay. Everything I tried, everywhere I went to convince farmers to try another life and sell their land ended with some scheme of Daniel’s trumping mine. He made it very hard for me win.

What happened to your relationship with Daniel when you were teenagers? Why did it end?

We started dating after my father lost his arm. Since our farm wasn’t operating, I was helping meet the medical bills by working on Daniel’s family’s farm. At first, I wished I could work anywhere else since Daniel’s parents had loaned my dad the machine that destroyed his arm. Even worse, Daniel and I never got along…. Until that summer. The more time we spent together, however, the less we competed. Soon, we grew close and shared an unforgettable kiss in a berry patch. He suggested we keep our relationship quiet given that my family was in upheaval as was his. His parents were arguing over money. The cost of replacing the machine that harmed my father would strain them to the breaking point and his mother was threatening to walk out. We didn’t think it was a good idea for either family to know about us. I thought he didn’t share in our family’s feud until I overheard him admit that he did resent my family. When I confronted him, he didn’t deny it, and it made me question if he really cared for me or was dating me out of pity. Crushed, I left for college in the fall and never looked back without a goodbye or another word to Daniel… until I returned, ten years later to buy our hometown’s land.

What, besides disbelief, did you feel when you realized you loved Eli and your hometown?

Wow! So many emotions. I’d spent so many years resenting my past, trying to make things right for Tyler, and never feeling like I had the time for love, that it took me by surprise. I tried fighting my feelings so that I could focus and get my job done. I had to put Tyler first, but, little by little, I learned that there wasn’t only one path for me and Tyler to follow. There was another option and that road led back to, of all places, Cedar Bay and Daniel. I had to stop holding on to past hurts and expectations for perfection and learn to accept and love Tyler, Daniel and myself- flaws and all.

When you told Daniel you loved him, you said it twice. Where you worried he hadn’t heard you the first time?

I couldn’t believe I’d said it! I had to say it again to convince myself. I did love Daniel. Despite everything that’d come between us in the past and during my current time in Cedar Bay, he was the only one I’d ever be able to say that to… besides Tyler! And I plan to tell him that, every day, for the rest of our lives.

*Thanks so much for inviting me to do this fun interview! It was terrific  – Karen

Karen Rock has adored romance since receiving Harlequin Presents books from her grandmother each summer. She formed her Young Adult writing partnership, J.K. Rock- pseudonym for the CAMP BOYFRIEND series, with her sister-in-law and Blaze author, Joanne Rock in 2011. When Karen heard of a call for submissions to Heartwarming, Harlequinís latest line, she was inspired by the possibilities of writing unforgettable, deeply romantic, tender love stories that mothers would feel comfortable sharing with their daughters. When she’s not writing, Karen loves scouring estate sales for vintage books, cooking her grandmother’s family recipes, hiking the high peaks, and redesigning her gardens. She lives in the Adirondack Mountain region with her husband, daughter, and two Cavalier King cocker spaniels who have yet to understand the concept of fetch though they know a lot about love.

The Grand Prize is:

And follow the entire Tour to earn more entries!

3/11
Getting Your Read On
Copywrite1985
Bottles & Books Reviews