Some thoughts on manners and human behaviour

We go online and meet people. Yes, behind the avatar/headshot a real person lives, with emotions and reactions to whatever we type. Often people forget that and live in their own head, taking only into account their intentions, forgetting how the written word can be attributed with another meaning. And we perceive a monster instead of the real person.

A joke can become an insult, a smile cannot be seen and ‘LOL’ is often disregarded, because we all know a typed LOL doesn’t necessarily mean there is actually playful laughter. And thus people give the words the meaning which lies within themselves.
Someone who is prone to expecting an insult will sooner be offended by a joke than the next person who is more inclined to take things on a lighter note. And so an online row is born. One which could have been avoided if the parties would have only taken the time to make a real connection instead of a fleeting ‘passing in the night’ and ask for the other party’s intention.Why not take the simple, but more confronting route and send a message to the offending person and ask for explanation? Why do people take a defensive position, and go into offence creating even more friction.

Solving a problem, however difficult and even more so online, is always better than fuelling one by adding words to the out of control situation without taking a step back and calming down first.
But even better would be to think before typing and pressing ‘submit’ or ‘send’. Remember the world can’t see your facial expression, your body language and hear the tone of your words. Be extra careful with your words and realise how one simple word can lead to an online feud, because sorry is often a word too difficult to type. Elton John sang it and he seems to be right. Sorry seems to be the hardest word, but it is a most powerful one.

Even if you know you haven’t offended someone, because you never meant to and you know your typed words didn’t have that meaning doesn’t mean that other person cannot be offended by them.
So why not just type an apology and explain you didn’t mean to hurt or offend? Why not own your words and their unintended outcome? It will not hurt you, in the end it will earn you the respect of your peers. Showing your embarrassment has a positive function. If you mean it, and yes your words will show their true meaning if you take the time to use the right ones, you will gain the trust and be judged more positive in future than when you do not show the least bit of understanding and embarrassment for the out of hand situation.
Remember being sorry for the outcome of something bad you did, even if you didn’t intend it as a bad thing, doesn’t mean you are a bad person. You did something you shouldn’t have, own it, learn from it and don’t make the same mistake again. In the end you and your social surrounding, be it online or in the ‘real’ world will life a much smoother life.

Today it is my turn to host the tour and Giveaway promoting Devoted, Book II in The Watcherís Trilogy

Can love conqueror all?
Michelle has managed to survive high school against all odds, but now she finds herself floating adrift in ìthe real worldî. With two horsemen defeated, there are still two unaccounted for, and surely they are plotting her immediate demise. Michelle leaves her small New Jersey town behind to venture off west. Barely able to comprehend her role as humanityís savior she now has to grapple with some new roles and identities. With her Watcher, Gabriel, by her side she must again face the evils of Hell and attempt to keep her family safe. Will love conquer all or will till death do us part come too soon?

I am proud to tell you I have been honoured to host Gabriel. one of the characters from this book. He’s here to tell us things, things we all should know …

So as most of you know, I’m Gabriel. I’m Michelle’s Watcher from Destine and Devoted. I value my role as her Watcher more than anything else. That being said I use to be an Archangel and I’ve had the privilege to witness a few of humanity’s major events. I thought for this post I would share with you a few of the most awe-inspiring moments I’ve had the opportunity to behold.

Of course the most awe-inspiring event I’ve ever witnessed occurs in Devoted. An event so precious and special that none of humanity’s accomplishments can hold a torch to it, but if you want to know what that event is you’ll have to read Devoted available now!

Well? Tickled? Here is where you can get your very own copy.

Katherine Polillo originally planned to grow-up and become an archeologist. Unfortunately the desert air dried out her skin, the dirt was impossible to get from under her fingernails, and she just couldnít pull off a fedora like Harrison Ford. So instead she pursued a career in education. She currently teaches high school history and special education, while fabricating fictional stories in her free time. She never really outgrew her imaginary friends stage, and instead has created lives and stories for the creations of her imagination to live in. When she is present in reality and not off on an adventure with her imaginary friends, she lives in a small, New Jersey town with her husband, the man to which all fictional leading men are compared, and their two spoiled rotten, ungrateful cats.†

For those who want to follow Katherine and show their appreciation of her work, she is on the interweb. Look for her on the following places:
Goodreads, Facebook, and Twitter

And finally, what you’ve been all secretly waiting for … *drumroll* The Giveaway! Yay! 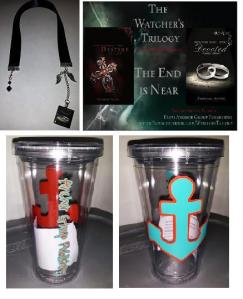 When I was asked to join this forum I had my doubts. Not another forum to keep up with? I’m already low on spare time and fora, or forums as the online plural is supposed to be, aren’t my ‘core business’.

After a trial run of posting some random musings I found the staff rather laid back. None of the restrictive rules and regulations you in general encounter on most forums. One can post virtually all one wants and most importantly how one wants. While at the same time it is also a place where one can share their latest work, or post it to be reviewed by other members. I found it to be a friendly place not just open to authors authors and readers, but also a podium for all other kinds of artists like musicians, or photographers!

The how is especially important to me, since I like to ramble. I love to muse and post my musings in third person, a thing which is called ‘Live Writing’.

To return to the topic at hand, this forum has a chat-room for those who feel the need to confer with their peers on a more direct level. They also have instant messaging for one-on-one chat, free personal email accounts, and even an arcade for those times of writer’s block. And there is a market place where one can find others who offer services. The only thing this forum lacks at this moment is a throng of people signing up to make this a lively community in which one can feel free to express ones self how one sees fit.

The basic rule on this forum? Tolerance, allowing each other the freedom of mind and expression, of course within the boundaries of the law. And I do not need to spell out which subjects are meant by that.

Leaves me only one thing to mention: the link to show you the way to this liberal place where writers can write without feeling the pressure of the Grammar Nazis or the Form King and Queen. And even if you should encounter them, be gentle in your response to the critique. And always keep in mind that the world would be a nicer place if we would all just be civil and allow others to have their opinion without trying to force ours upon the world surrounding us.