Three romances? By who?

HA! Don’t tell me you’ve not heard of Tom Winton. The author of

Still not sure why you should know this author? Read my review on the above book here and know that the romance box set is on my e-reader ready to be read.

Right, about this romance box set. Today is your chance to get three great books by a more than talented author (best-selling author) for only £1.99 in the UK! 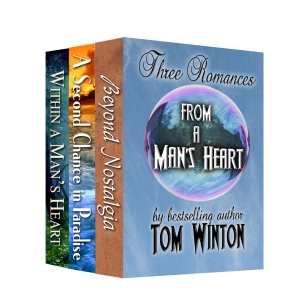 I’m eager to dig in, but I can imagine you want a bit more info, even if they’re all together in a box set and for only $0.99 (can’t go wrong there). Hurry because tomorrow (Saturday April 12th) it will be up to $1.99 and the day after (Sunday April 13th) you will have to pay $2.99. Which still isn’t bad for three great reads.

But, let me give you a small taster for each individual book first.

Beyond Nostalgia
Many readers have said that Beyond Nostalgia is a story that kept reappearing in their minds long after they read it. A multi-category Amazon Bestseller, it is book that will make you laugh and make you cry. It will break your heart and then it will heal it again. You’ll love the main character, and you will hate him as well.

“Dean Cassidy looks back on a life filled with hardship and remembers Theresa Wayman, the bright spark that lit up his world when he was eighteen. As an adult, many years later, Cassidy continues his struggle to be successful in life, but can’t move past his betrayal and loss of Theresa.

Beyond Nostalgia is a poignant story about growing up, making choices, betrayal, forgiveness and moving on. Cassidy and Theresa find inspiration, joy and acceptance together in their world of dysfunctional families and economic hardships. But one night Cassidy, in a drunken stupor, makes a terrible choice that costs him his relationship with Theresa. Twenty-five years later, with the encouragement of his devoted wife, Cassidy focuses his sadness and angst into writing a book – a book that will eventually lead him to another crossroad in his life and redemption from his suffering.

Within A Man’s Heart

Four years after burying his young wife, New York sales executive Christian Crews still can’t move forward with his life. Day after day, treasured memories of his beloved Elyse continue to drift through his spirit like an endless procession of mournful ghosts.

Chris wants to leave Manhattan—walk away from his job and the apartment he and Elyse once shared. He dreams of moving to New Hampshire, where he feels he just might have a chance of finding peace. But in his grieving mind, breaking away from those memories would be the same as abandoning Elyse—an unforgivable act of betrayal he could never live with.

Then, on the fourth anniversary of Elyse’s death, Chris makes two shocking discoveries, and a part of him begins to believe that she would want him to go on with his life.

Two weeks later he makes the move to New Hampshire, and minutes after arriving in the small rural village of Mountain Step, he meets a beautiful local woman with mesmerizing gray eyes and a heart as big as the surrounding mountains. Beginning another emotional relationship may be the last thing on Chris’s mind, but he soon finds himself falling for Gina Elkin, every bit as hard as she’s fallen for him.

Could there be a future for them? Will Elyse allow it? After all, she’s still deep within Chris’s heart—a place no one else has ever been.

A Second Chance in Paradise
Long Island salesman Sonny Raines has had it. He’s sick and tired of living in a world where wrong always wins over right. Then, on his thirty-ninth birthday, when he loses his job and comes home to the most devastating shock of his life, that’s it. He’s dropping out.

With nothing left to lose, and little in his pocket, Sonny chucks it all and drives his aging van fifteen-hundred miles to the lower reaches of the Florida Keys. All he wants is to get over his recent losses and simplify his hectic life, and that’s exactly what he thinks he’s doing when he settles on a paradisiacal speck of an island known as Wrecker’s Key. While surrounded by the warm aquamarine waters of two tropical oceans, he not only falls in love with the key but also establishes a close bond with the free-spirited locals who call it home.

But all isn’t blue skies, swaying palms, and coconut oil on Wrecker’s Key. There’s trouble wafting in the warm breezes that caress the island. Although Sonny certainly isn’t looking for romance, he finds himself falling for his next door neighbor. Ex-model Julie Albright just may be the kindest, most beautiful woman to ever grace his eyes, but there’s a snag. She has a small physical flaw that, no matter how hard he tries, Sonny can’t overlook. And his feelings are no secret to Julie. She can read them, and they weigh as heavy on her heart as they do on his. Then things get even worse. One night, under the cover of darkness, danger drifts up the deep, silent currents from the lower keys—serious danger—life and death danger. And Sonny Raines finds himself right in the middle of it

***
I must admit I’m a big fan, but as you might know, I’m not easily impressed, so when I say this author knows how to spin a yarn and deliver a punch, there’s a big chance I’m not talking rubbish. 🙂
But let me introduce Mr. Winton to you by letting him do the talking. I asked him to give me some really fast answers to a few questions that I think show us more about the man behind the author.

Hi Tom, thanks for taking the time to do this Fast Ten with me. Hold on to your seat because here we go.

Sweet or savoury? – I’ll run with savory/savoury for right now, Lucy. Love the aroma of something tasty cooking on the stove.

Coffee, tea, or anything else? – Just had two cups of Joe, so I’ll take a decaf this time around. I’m wired enough.

Dark or milk chocolate? – Either is terrif, but I’ve been known to walk a mile for dark chocolate.

Favourite dish? – That’s a tough. The best I can do is narrow it down to either seafood or Italian.

Mountains or sea? – For many years I’ve lived near the sea and spent literally tens of thousands of hours fishing either out on the sea in a boat or along its shores. Now I’ll take the mountains. I lived in a rural setting near Maine’s North Woods for five years and still dream of going back. I’m also considering moving to the Great Smoky Mountains in either North Georgia or North Carolina.

Staying or moving? – As soon as I can swing the cost I’m going to move out of Florida and go to one of those places I just mentioned in the previous question.

Organised or go with the flow? – I’m definitely a flow-goer!

Morning or evening? – Morning for sure. Far and away the best time of each day is just moments before a morning sun rises–when that rose-colored glow of new hope appears on the eastern horizon.

Complain or act? – I’m one heck of a good complainer, but when it’s time to act I can really kick it in gear too. The hard part is to get me moving. At the only parents/teacher meeting my mother and father ever bothered to go to, my second grade teacher told them that, “Tommy can do anything, BUT he has to be pushed.” It’s too bad I never liked to be pushed. Ha!

Fight or flight? – Lucy, although I could write an entire trilogy about all the fights I’ve had in my life, I’m at the point now where I let a lot of negative events slide by. But if I get cornered, I’m gonna come back swingin’ — hard and fast. I have absolutely no room for blatant injustice or instigation. Thanks heaps for having me on your great site, Luce!

You, and your books are more than welcome anytime! Well, readers, didn’t I tell you his answers would reveal more of the man behind the author? But now you want to know where to find and follow him online, I guess? Let’s not keep you waiting then, You can stalk, erm I mean follow, yes follow, Tom Winton on:

His website |  Facebook
Have you got your copy yet?
THREE ROMANCES FROM A MAN’S HEART
by
TOM WINTON 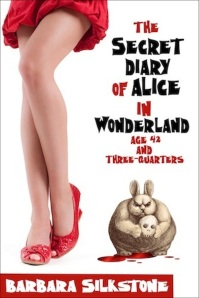 The Secret Diary of Alice in Wonderland, Age 42 and Three-Quarters

Alice Harte’s life is falling apart. Her boss at the real estate firm where she works is a litigious and murderous man with ties to “The Mob” in Florida. She KNOWS he has literally beheaded someone in the past.

Her whole life she has dreamed of living in England and meeting a man similar to John Cleese. In an attempt to break away she flies to England to meet Nigel Channing, who has been charming her through e-mails and phone calls.

As her life in Miami falls apart, with mobsters and a pending fraud lawsuit, her romantic savior in England looks more and more tarnished by the hour. And then she stumbles across a beheaded mob boss. How will she ever keep her head and win the lawsuit? And what about love?

The 99 cent price begins today, to be precise it started at 7 am.That’s a 61% discount.

and back to full list price of $3.99 on Wednesday.

Silkstone’s writing has been described as “perfectly paced and pitched – shades of Janet Evanovich and Carl Hiaasen – without seeming remotely derivative. Fast moving action that shoots from the hip with bullet-proof characterization.”